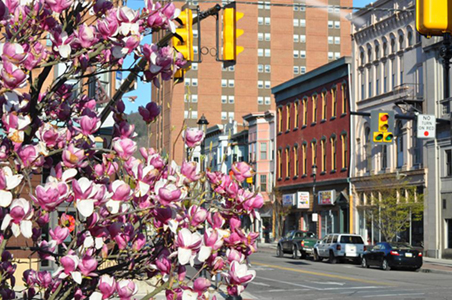 Largely residential, 84 percent of the Tamaqua Historic District contributing buildings are dwellings that date primarily between 1850 and 1930, with earlier and later examples scattered throughout the district. More than 37 percent are duplexes and 12 percent are row homesn Nearly all are under private ownership and located on narrow lots.

The remaining 30 percent are single family homes, which tend to sit on somewhat larger lots with wider side yards than the attached homes. Queen Anne homes dominate both in high style, single-family dwellings and vernacular duplexes. Other represented styles include Greek Revival, Italianate, Craftsman (bungalow and cottage), Second Empire, American Foursquare, Colonial Revival, Tudor Revival, Mission, and Prairie. Many homes are a mix of several styles.

The majority of the district’s contributing dwellings are vernacular, with decorative elements from styles popular at the time of their construction. Decorative art glass is widespread in the district in both high style and vernacular examples. Early residential examples are relatively scarce. Surviving early settlement vernacular buildings include the 1801 Burkhardt Moser log home at the rear of 307 East Broad Street, and a few homes in the vicinity of The White Swan Hotel at 256 Cedar Street, including 252 Cedar Street, a circa 1860 brick home with Georgian segmental arched roof dormer. 101 Market Street is a circa 1850 brick example located across Mauch Chunk Street from the 1827 Little Schuylkill Hotel. Extremely rare Victorian vernacular miners cottages dating from circa 1860 are found in a row at 124-132 West Cottage Avenue.

Many mid-nineteenth century a 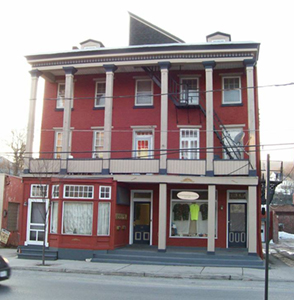 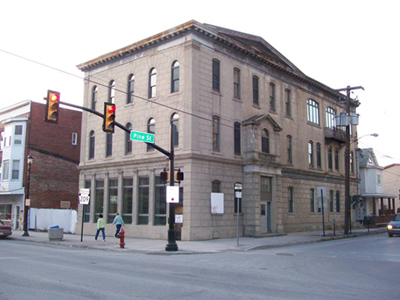 Vernacular side-gabletwo-story frame houses, with front cross gable or Mansard roofs are the most frequent form in the borough. Cast stone variations of the form are seen; brick is a rarity. Most have early twentieth century porches with classical columns or battered piers; some have porches with turned columns. 539 East Broad Street is one intact, highly shingled Queen Anne Free Classic example. Houses of this type were built in Tamaqua into the second decade of the twentieth century, with classical, rather than Victorian, decorative elements becoming the norm through time. By the nineteen-teens, bungalows, cottages, and American Foursquare single homes were being constructed throughout the district of both frame and brick with a mix of Craftsman and Colonial Revival detailing. A rare, high style Prairie example -- concrete with wide overhanging eaves -- is located at 634 East Broad Street. Colonial Revival dwellings are concentrated on the eastern end of the historic district and were built in Tamaqua beginning in the 1920’s. Both vernacular and high style examples with frame, brick and stucco variations are found intermixed with very late examples of the Queen Anne style.  Continue Reading...